AUSTRALIA: Moira Shire Council has taken delivery of a modified Mil-tek EPS900 polystyrene compactor. A massive waste-disposal cost in landfill has been transformed into a cash-flow positive project... 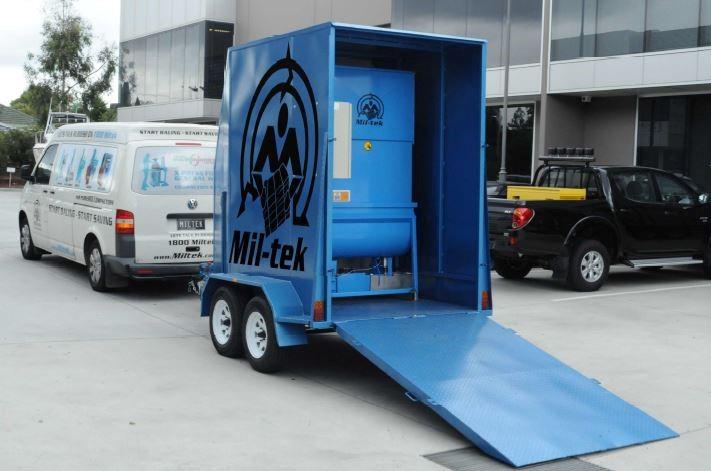 AN INNOVATIVE AND GREEN APPROACH

An innovative and green approach to polystyrene recycling is making a name for itself in Moira Shire on the Murray River in Northern Victoria and the good news is spreading.

Moira Shire Council has taken delivery of a modified Mil-tek EPS900 polystyrene (Styrofoam or EPS6) compactor. A massive waste-disposal cost in landfill has been transformed into a cash-flow positive project for Moira Shire and its ratepayers. The unit negates the high price of polystyrene/styrofoam disposal in landfill (between $100 - $200 AUD per m3) and recycles the waste into a product with saleable commodity value.

A custom-built trailer and power generator turns the Mil-tek EPS900 into a mobile polystyrene compacting unit and was built in collaboration with Moira Shire Council. It was financed through the Victorian government’s Adaptation and Sustainability Partnership.

Since the machines delivery in May 2014, Moira Shire have diverted over 400m3 of EPS, when convert into dollar value means that the investment will have paid for iteslf in less than 12 months.

GOING ABOVE AND BEYOND

John Mangan, Co-ordinator of Waste Management Services at Moira Shire, says he is absolutely satisfied with the result that allows the compactor to be easily moved around the shire to service separate EPS collection locations.

“The EPS 900 machine was modified to run with a reduced start-up current demand, allowing the machine to be powered by a small on-board diesel generator,” Mr Mangan said. “I can’t speak highly enough of [Mil-tek National Service Manager] John Fisher. “We threw a lot of curve balls at him and he not only handled every one, he went above and beyond what was necessary to put it all together.”

Mr Fisher says the company invested in design and consultancy initiatives and worked in close collaboration with Moira Shire to build a total waste management solution. “We are pleased to offer our customers specific expertise to help serve the local community with enhanced waste-management efficiency.” Mr Fisher said.

Mil-tek provides state-of-the art compactors for all types of waste managment needs and advice to improve green credentials. It is the leading supplier of compactors and waste presses worldwide and has the most comprehensive and flexible product range on the market.

Mil-tek products are known for their durability and efficiency, and can help businesses reduce their carbon footprint and improve their profitability through more effective management of waste streams.

For more information about Miltek in Victoria please visit www.miltek.com.au/

About Your Private Data

By submitting a form on this website, you are requesting for Mil-tek to contact you directly. Your personal information will be kept securely and remain private.

Should you wish to opt-out from all future communications, please contact a Mil-tek representative or click here